researchers in china have moved one step closer to making the quantum internet a reality. using two drones and two ground stations, a team of scientists from nanjing university in china has successfully beamed entangled photons across a distance of 0.6 miles (1 km). the experiment demonstrates the potential of a mobile quantum network, whereby encrypted information could be sent more securely than the internet we know today. 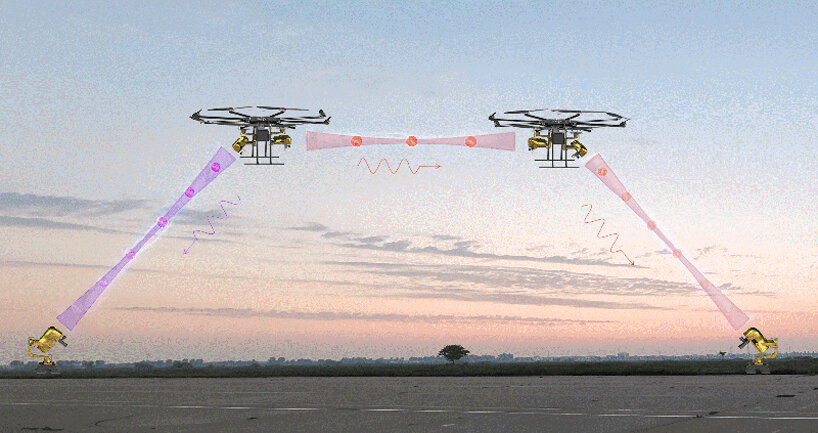 image via physics (main image by jason blackeye on unsplash)

the experiment is set up with two ground stations – named alice and bob – and two drones hovering in between them. one drone generates and beams the entangled photons to ground station alice and to the second drone, which acts as a ‘relay node.’ the second drone then relays the information to ground station bob. from this test, the researchers found that the photons remained entangled across a total distance of 0.6 miles (1 km) (via physical review letters). the success of this experiment demonstrates technology that could be scaled up to form the basis of the quantum internet.

but what exactly is the quantum internet? the quantum internet applies the laws of quantum mechanics and it’s set to revolutionize global communication. it’s based on quantum entanglement, in which two particles become inextricably intertwined with one another. this means that messages sent via these entangled photons will be totally secure, and unlike the internet we know today, any attempt to hack the information will alert the users (via physics). it’s no wonder that researchers from all over the world, including NASA, are working earnestly to develop this ground-breaking technology.