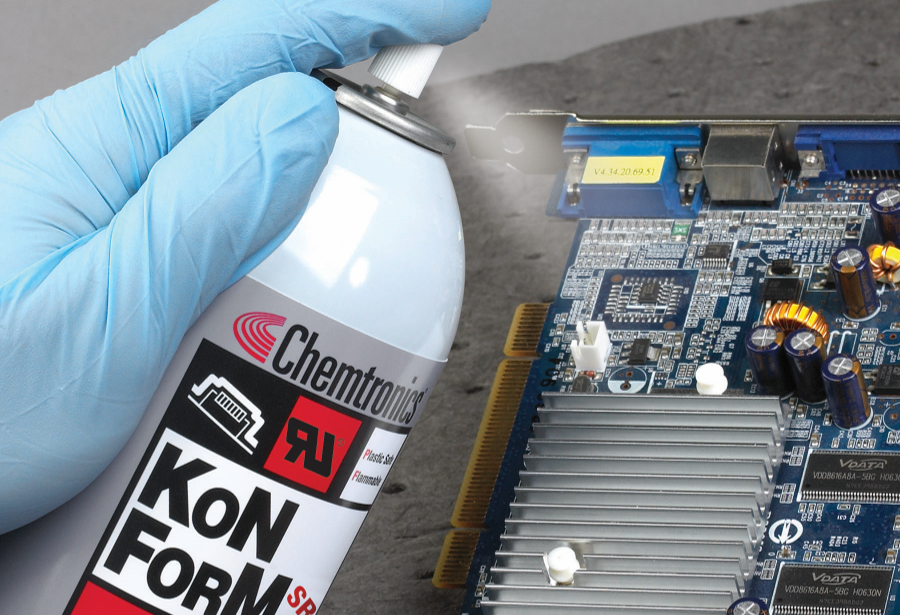 What is Conformal Coating Made Of?

Conformal coatings are generally made of a polymeric resin and, when necessary, thinned in one or more solvents, thus allowing the material to dispense and flow properly.

The best type of resin to choose depends on the required protection needed for the electronic device and the particular environment it will be located. Method of application, ease of repair, and rework are also important factors to consider.

“Typical” conformal coatings are 1-part systems that have a resin base, and maybe diluted with either solvent or (in rare cases) water. These coatings are semi-permeable, so do not fully water-proof or seal the coated electronics. The coatings protect from environmental exposure, which improves the durability of the electronic devices, and is still practical to apply and repair.

Coatings are categorized by their base resin:

Whether or not coating is required depends on the environment the electronics will be used in, the sensitivity of the electronics, and the durability required. Mission critical, IPC class 3 devices are more likely to be coated because of their critical nature. The increased popularity surrounding electronic miniaturization and wearable electronics has led to a higher demand for the extra protection and reliability offered by conformal coating.

Typically, conformal coatings are not waterproof. These coatings are semi-permeable, so do not fully water-proof or seal the coated electronics. They protect from environmental exposure, improving the durability of the electronic device, while still being practical to apply and repair. The exception to this are parylene coatings, 2-part epoxy coatings, and potting compounds. Parylene coatings, epoxy coatings, and potting compounds are not offered by Chemtronics, so they are outside of the scope of this article.

How Do You Apply Conformal Coating?

The following factors should be considered when developing a conformal coating application process:

How Thick Should I Apply Conformal Coating?

Conformal coatings are generally very thinly applied, which provides the best protection possible, but minimizes heat entrapment, excess weight, and other issues. Typically, conformal coating is applied between 1 to 5 mils (25 to 127 microns).

There are three main ways to measure the thickness of a conformal coating:

How Long Does It Take For Conformal Coating To Dry?

How Do You Remove Conformal Coating?

You may be required to remove a conformal coating from the PCB to replace damaged components or other types of rework. The basic methods as cited by IPC are:

What Type of Industry Certifications Are Available for Conformal Coatings?

Certifications are used to separate conformal coatings from general-purpose varnishes and shellacs. There are dozens of user and industry specifications, but the two major certifications are most commonly referenced:

This standard originated with the military standard MIL-I-46058C, which became obsolete in 1998. The civilian version IPC-CC-830B is nearly identical – if a board passes the IPC spec it should also pass the MIL spec., and vice versa. IPC-CC-830B is a battery of tests that includes appearance, insulation resistance, UV fluorescence, fungus resistance, flexibility, flammability, moisture and insulation resistance, thermal shock, and hydrolytic stability. All Chemtronics Konform coatings are IPC-CC-830B certified.

Underwriters Laboratories (UL) is considered a credible and reliable safety certification body worldwide, and UL certification is commonly required for consumer goods. UL746E tests for both the electrical safety and flammable safety of coated electronics. For electrical safety, there is a battery of tests similar to IPC-CC-830B, but with a cycling current load to constantly measure the failure of the isolative properties of the coating. The flammability test uses the UL94 standard like IPC-CC-830B, which involves attempting to light the cured coating with an open flame, then observing the sustainability of the flame.

Once a coating has passed UL746E, it can be registered with UL and assigned a registration number. Products certified and registered to UL746E standards can include the UL symbol (which looks like a backward “UR”). To maintain the registration, a coating must be retested annually.

What Are The Most Common Conformal Coating Defects?

The following are the most common conformal defects (photos courtesy of NPL):